New UWS-Oxfam Partnership report proposes a blueprint for a National Outcome on care to add to the National Performance Framework, backed by leading organisations. 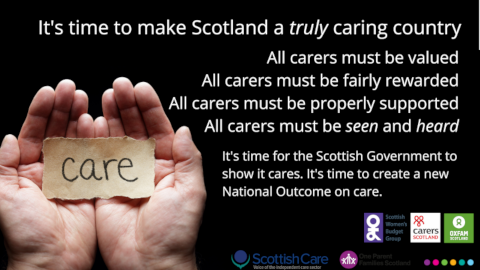 Towards a Scotland That Cares

A new national focus on care, care workers and unpaid carers is required, a report by the University of the West of Scotland (UWS)-Oxfam Partnership has identified.

The release of the report ‘Towards a Scotland that cares – a new National Outcome on Care for the National Performance Framework’, coincides with National Carers Day; and warnings from leaders in Scotland’s care sector that it is facing a very difficult winter.

The report highlights that none of the 11 existing National Outcomes within Scotland’s National Performance Framework, which are focused on care, carers and care workers.

The report, created in consultation with care workers, unpaid carers and organisations which represent them, provides a detailed blueprint for the addition of a new National Outcome on care to ensure the Framework enables Scotland to “truly become a country that cares”.

Dr Hartwig Pautz, Senior Lecturer in Social Sciences at UWS, said: “Creating a new outcome dedicated to care would make Scotland one of the first countries to do this. Our report acknowledges that in recent years, significant and welcome policy has been developed in Scotland relating to diverse aspects of care; however, it highlights that an integrated National Outcome pulling everything together is urgently needed.

“By adopting a new National Outcome on care, bolstered by a robust monitoring framework, Scotland would be in a significantly improved position to measure whether it is valuing, and investing in its many care workers, unpaid carers and those experiencing care.”

Dr Chloe Maclean, Lecturer in Social Sciences at UWS, said: “The findings of this report are particularly important within the context of the Covid-19 crisis and how it made visible the problems concerning care in its unpaid and paid forms – care should therefore be an essential, core element of the National Performance Framework.”

Each of Scotland’s National Outcomes is underpinned by a series of performance indicators, to measure and drive spending and policy progress. The report suggests wording for a new Outcome on care, as well as a series of linked indicators to monitor success. The proposed Outcome covers the full spectrum of paid and unpaid care both for adults and children and for those with and without additional support needs.

In 2022, the National Performance Framework will start to undergo a comprehensive review process. The report authors, backed by Oxfam Scotland, Scottish Care, One Parent Families Scotland, the Scottish Women’s Budget Group, and Carers Scotland, argue that this is a major opportunity to anchor a new Outcome specifically on care in the Framework.

Jamie Livingstone, Head of Oxfam Scotland, said: “The current winter crisis facing Scotland’s care sector clearly requires immediate political intervention, but it also requires long-term vision, strategy and leadership if Ministers are to avoid simply lurching from one crisis to another while leaving those delivering care to continue to pay the price.

“The fundamental problem is that people in Scotland who care for others, whether paid or unpaid, and whether for adults or children, have been undervalued and under rewarded for far too long. For too many people that results in personal and economic costs, including poverty. This systemic undervaluing of care is inextricably linked to the fact that care work is overwhelmingly carried out by women.

“Scotland has a chance to show that it doesn’t need to be like this while setting a ground-breaking international example. This research places a blueprint for a new National Outcome to drive and track long-term change on the table. Now all that’s needed is the political vision to test and deliver it.”