Home • Get involved • News and events • New research: child poverty targets “destined for failure” unless employability schemes for parents and carers are overhauled

For single parents, the vast majority of whom are women, the barriers which many mothers already faced to entering, remaining and progressing in employment - such as a lack of flexible, affordable childcare options and a shortage of fairly paid, flexible jobs - are only compounded by the fact that they are also the sole breadwinner and carer for their families. 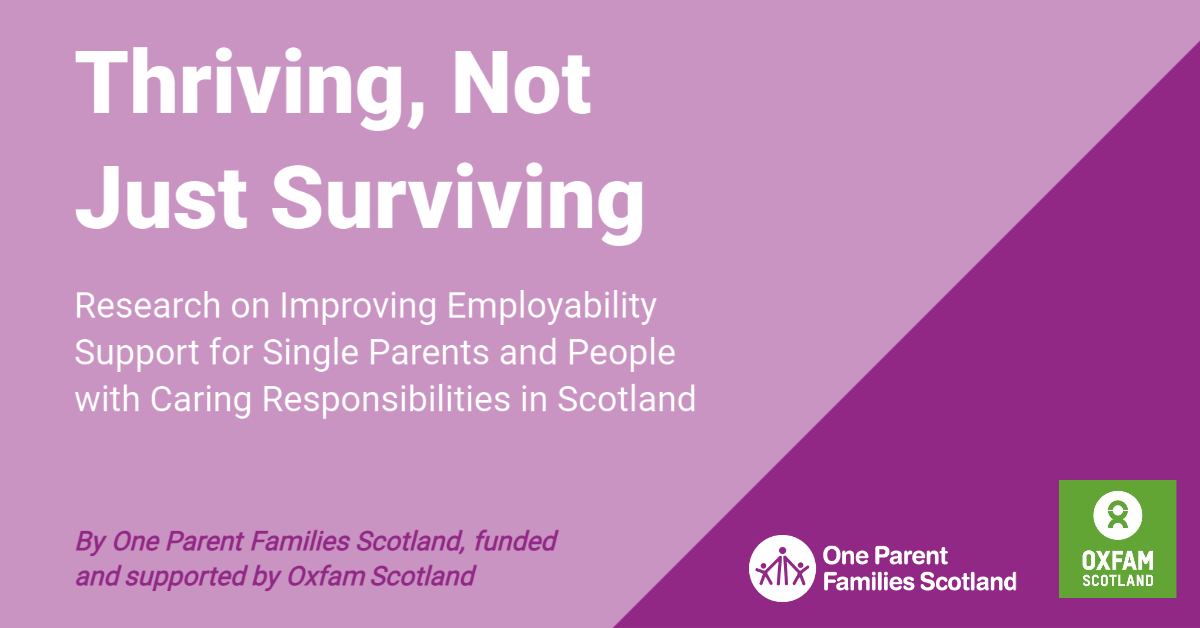 The next Scottish Government must “significantly accelerate” progress in reforming employability support to help deliver Scotland’s legal child poverty targets, according to a new report from One Parent Families Scotland (OPFS), with funding and support from Oxfam Scotland.

The research, which is based on focus groups, interviews, and an analysis of previous employability programmes, makes a series of recommendations to improve support for single parents and carers who often face major extra barriers to finding and sustaining work.

While the report recognises “a number of welcome and important steps” have been taken since the devolution of employability in 2017, like moving away from the UK’s sanctions-based approach, it says there is “more to do to establish a distinct Scottish approach”.

While not all carers are able to pursue paid work, the charities say single parents and carers who want paid employment must be better supported towards and into good-quality jobs which provide a reliable route out of poverty. They warn a failure to do so could push those with caring responsibilities further to the back of the employment queue amid a predicted surge in unemployment due to the pandemic.

Today’s OPFS report calls for five key principles to be embedded and delivered in Scottish Government employability programmes: dignity, inclusion and outreach; empowerment; personalisation; holistic support; and the pursuit of “good jobs, not any job”.

The new research comes alongside a joint call by OPFS and Oxfam Scotland, together with the National Carer Organisations, the Scottish Women’s Budget Group and Scottish Care for a new National Outcome for Scotland on valuing and investing in care and carers.

“Among the lessons of the COVID-19 pandemic, the enormous challenge of balancing work and childcare alone is surely at the forefront.

“For single parents, the vast majority of whom are women, the barriers which many mothers already faced to entering, remaining and progressing in employment – such as a lack of flexible, affordable childcare options and a shortage of fairly paid, flexible jobs – are only compounded by the fact that they are also the sole breadwinner and carer for their families.

“Recognition of these barriers and the intersecting inequalities which keep them in place should be at the heart of any effective employability strategy, but our research suggests we must do more to meet the particular needs of single parents, carers and women more generally.

“Nearly four out of 10 children in single parent families in Scotland live in poverty. This is a shameful statistic. We fear our legal targets to reduce child poverty will be destined for failure unless single parents’ access to high quality employment is improved as a matter of urgency.”

The Scottish Government is committed to a legal target of reducing child poverty to 18% by 2023/24 and less than 10% by 2030. Children in single parent families are one of the government’s priority groups as part of its plans to tackle child poverty.

Nazima, an Edinburgh single mum of three who took part in the research, said:

“For eight years I worked in a pharmacy, which was a nine to five job, and I’ve also worked in restaurants in the evening, and in retail. But now the hours for these jobs won’t suit me because of the kids – what am I going to do after school to pick them up and things like that?

“In the past when I have gone to a Jobcentre I just felt like they didn’t care. They just want to do their part and get it over and done with. Before the lockdown last year I went through [a third sector organisation] in Edinburgh, they helped me find a [short-term] job that suited me in a school and apply for it. They helped me get a Level 2 in food and hygiene and they even support you with things like claiming benefits, so that really helped.

“But I don’t really want to work in a school as a dinner lady, that’s just because of the hours and the holidays. And when I looked before through the Jobcentre it was jobs like cleaning offices or things I wouldn’t pick. But I’d look after my kids first rather than do something I really want because of the childcare. When you have a young child in nursery, what options do you have to do a nine to five job other than to put your child into a private nursery, and then you have to pay the fees even when you’re not using it or you’ll lose the place?”

“People who look after others are the glue holding our country, economy and communities together yet, perversely, they can find themselves facing poverty as a result; often locked out of the job market due to indifferent employers and inflexible employability programmes.

“We need an urgent step-change in the way carers and parents are valued, supported and protected from poverty. The next Scottish Government should make a generation-defining commitment to carers by creating a new National Outcome on care to place carers and the people they look after at the heart of national policy and spending decisions. This would be an important step towards repaying the debt of gratitude the nation’s carers are owed.

“As this report shows, improving the support available to those with caring responsibilities who choose to find paid work will be a critical element. While the trajectory of employability support in Scotland is positive, the speed of change must significantly quicken.”

Read about the call for a National Outcome on Care with additional information in Oxfam Scotland’s, Care, Climate and COVID-19, Building a Wellbeing Economy for Scotland.

See the full report and executive summary of ‘Thriving, Not Just Surviving: Research on Improving Employability Support for Single Parents and People with Caring Responsibilities in Scotland’.